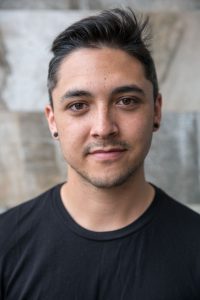 Maize Longboat is Mohawk from Six Nations of the Grand River in Ontario and was raised in the unceded traditional Coast Salish territory near Vancouver, BC. He is currently pursuing his MA in Media Studies with the Department of Communications at Concordia University where he is required to complete a research-creation project as part of his thesis work. Maize completed several research projects during his undergraduate studies at the University of British Columbia, including a research practicum with an independent, artist-run gallery that allowed him to explore how creative practice and expression relates to the growth of Vancouver’s emerging artists’ Indigenous identities. Maize’s present research focus includes the utilization of video games by Indigenous peoples and is thrilled to be a participant in the Skins 6.0 workshop.